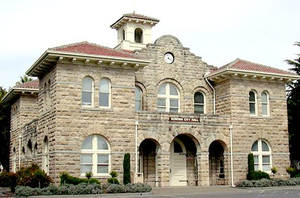 It is appropriate to say that the Sonoma Plaza lies at the heart of downtown Sonoma, but it is also correct to say that downtown Sonoma arose around this four-sided square, bordered on the North and Northwest by the Mission and Church buildings and surrounded, today, by shops of all kinds.

Originally surveyed in 1836, the Plaza was contructed according to Vallejo's strict measurements; he wanted a specific size and grid for the entire town. The Plaza itself became the largest of its kind in California -- exactly 666 feet square. To the South is Broadway, originally a 110-foot-wide straight avenue which leads directly to the center of the Plaza. To the East and West, the perimeters of the town were to extend exactly four blocks of 400 square varas each, which would be divided into four 100-vera lots.

Immediately surrounding the Plaza were a number of historic structures, including the Mission, Vallejo's barracks, the homes of several dignitaries (including Colonel Joe Hooker ), the union hotel and Green's courthouse. It is bordered on the north, of course, by Vallejo Street (today Spain Street East), on the south by United States Street (East Napa Street), on the west by Huerta, or Orchard Street (First Street West) and on the east by Cuartel Street (First Street East).